This is the homepage of ‘snail forge’, my custom knife and blade business.

My goal is to make high quality blades that will be used. Making a good blade costs time and money. It would be a bit sad to go through all that effort to make one that would never be used for its intended purpose. Many knifesmiths make pocket knives or fantasy style knives that spend their entire lives sitting behind glass in a shadow box. I decided that if I am going to make something, I want it to live a life. This is one of the reasons I specialize in straight razors and kitchen knives. Those are 2 specific types of blade where the buyer will actually use them routinely.

I take pride in my work. If something I make does what it needs to do, and lasts a lifetime when properly cared for, then I’m happy.

So, why snail forge?

Every smithy has a name. Mine’s ‘Snail Forge’. A Master Smith once told me that it is traditional for a smithy to be named after some aspect of the local geography / surroundings. For example, his was near the cannon river, so he named it cannon river forge. Living in a more or less urban setting, my options were a bit more limited. There’s a small creek running behind my garden, but it’s not much to look at and most of the year it is covered in weeds.

When I was building my smithy, I had to clear away trees and clean up an old compost heap. I found lots of empty snail shells, and quite some live ones as well. There are plenty of those speed demons in that corner of my garden. And my kids love them because they are cute and always carry their house with them, so I decided to name my workplace the ‘Snail forge’. I suppose people who produce their own vegetable think snails are less than cute, but since they don’t eat steel, we get along just fine. 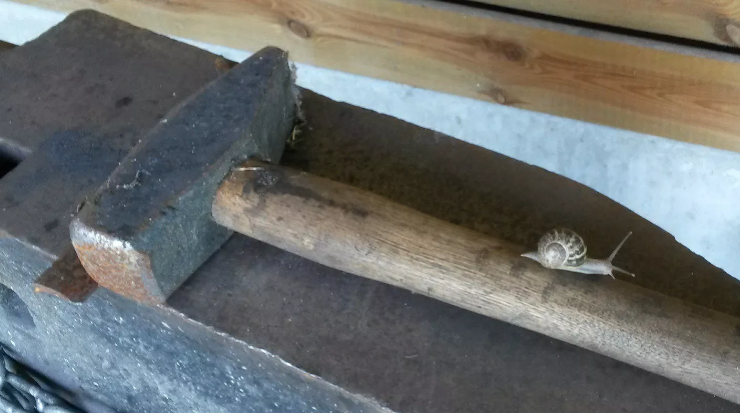